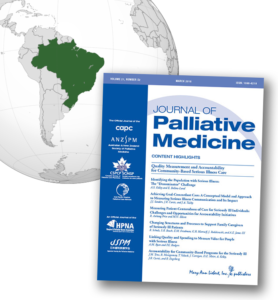 This article describes an effort to implement POLST as part of a test study in Brazil through a very careful translation and cultural adaptation process. The study authors worked in consultation with several U.S. POLST leaders, including members of the National POLST Paradigm Task Force, and as such, some are credited as co-authors and many more and acknowledged in the body of the paper.

There were many deeply thoughtful components to this adaptation process, including: an iterative translation process, training of health care professionals for this study, selection of test patients (for this study, but also which would be appropriate for POLST generally), selection of which POLST Form to use as a model, at what reading level the document should be written, specific word choices (especially for the name of the process and form), which health care professionals should sign the POLST form, feedback from health care professionals regarding any obstacles or discomfort in conducting POLST conversations, patient feedback, an in-person meeting with the National POLST Paradigm Task Force, and consultation with an attorney specialized in advance directives. The goal of these many steps was to eliminating any confusing or inconsistent aspects of the form, as well as avoid potential cultural and legal obstacles, and assess physician and patient/surrogate comfort with and confidence in the process also.

Some notable changes made in the adaptation for Brazil included substituting the word “order” for “prescription” in the title “Physician Orders for Life-Sustaining Treatment” because the word “order” is not used often in the medical context in Brazil, and holds negative connotations of “arrogance, power over, and hierarchy”—whereas the word “prescription” is common and conveys “the intended message that a physician assessed the patient and takes responsibility for the actions he or she has prescribed.”

The study authors state, “As guidance for future adaptations of POLST to other countries, we would recommend the following principles: (1) to go beyond simple translations and perform formal multi-step cross-cultural adaption processes; (2) to engage in partnership with the National POLST Paradigm Task Force early on; (3) to fully understand the differences between POLST and advance directives, including the kind of regulatory support needed in each context; (4) to use language compatible with that of medical records; (5) not to treat the POLST form as if it were a questionnaire administered to patients; (6) to use multistep pilot tests involving healthcare professionals, patients, and surrogates; and (7) to consider any applicable, venue-speciﬁc regulations regarding health-care representatives/surrogates.”

Further, “The following are strengths of the study: (1) including a layperson in the reconciliation committee; (2) reviewing the feedback from the pilot tests in an iterative process; and (3) engaging in conversations with members of the National POLST Paradigm Task Force throughout the cross-cultural adaptation process.”

Sign Up For News From The National POLST Paradigm