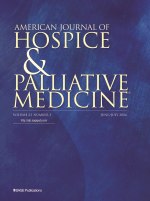 In the two years from which the study data were taken, 2010 and 2011, 14,979 individuals died of cancer in Oregon. Death certificates which included “malignant neoplasm” as the primary cause of death were matched to individuals in the Oregon POLST Registry.

In Oregon, health care professionals who sign POLST Forms derive from all care settings, including long-term care, health systems, hospitals, clinics, hospice, home-based care, and individuals. All POLST Form signers are required to submit completed POLST Forms to the Oregon POLST Registry unless the patient specifically opts out of the registry.

Who signed the POLST Forms?

Within the 2-year retrospective study timeframe, almost 15,000 patients died of cancer. About 41% (6145) of them had POLST Forms in the Oregon POLST Registry.

Of the patients who were in the Oregon POLST Registry, 53.7% of their POLST Forms were signed by primary care physicians and 15.3% by hospice/palliative care specialists, compared to 14.9% by oncologists.

How did patients fare? Does POLST correlate with the honoring of patient wishes?

Most patients wish to die at home rather than in a medical care facility. POLST Forms are designed to let patients specify a preference for “comfort measures only,” which explicitly states that they do not wish to be transferred to a hospital (except in cases in which it would be necessary to maintain their comfort). So whether POLST Forms result in a difference in location of death for patients is often quantified in order to determine whether POLST makes a difference in honoring a patient’s wishes.